At the next meeting of the Surrey Beekeepers' Association, the experts are offering a bee health inspection service, checking for varroa mites and other hideous lurgies.

This means bringing twenty or so bees, frozen. Poor little devils. I caught them last week, and they are sitting in the freezer in a matchbox.

Email ThisBlogThis!Share to TwitterShare to FacebookShare to Pinterest
Labels: disease

Took a look at the hive today, outside only, at about 5.30pm. Tons of activity - very busy, positively teeming with bees at the entrance. Will add a pic to this blog.

Also spoke with the neighbour, who said that her dog Pebbles had been stung in the eye - ouch! She's now a bit more cautious about running about barking at the bottom of the garden, and the dog is more careful, too...


The remaining excitement was learning how to make sure that all the bees have been brushed off the bee suit before taking it off - not helped by having gloves with comedy pink frills round the edges...

After extracting a dozen or so rather cheesed-off bees from the gloves, I took the suit off (what a relief) by peeling the top half down and tying it round my waist with the sleeves.

Not so cool was a bee that flew up off the suit, and into my hair.

Completed my first solo hive inspection, and nerve-wracking it was too...

After checking ten times that I had done the suit up properly, when I got to the hive I found I had left the right legging unzipped. Bugger.

When I had taken the roof off, taken the feeder and crown board off, and taken the super off... the smoker ran out of smoke. Buggeration.

The next-door neighbour then made a point of shouting at her dog, "Come away Pebbles, you've already been stung once." At this point I rushed a bit, and the bees went potty. It's all going Pete Tong.

The bees had a good old go at me as I checked a few frames, and generally made me want to go away - probably exactly what they wanted, too. They look happy enough though, no queen cells and lots of new foundation being drawn out with honey in them.

Check out the gloves, by the way - the only pair we had in the house... Zebra stripes, pink frills and pearls!
at August 17, 2006 No comments: 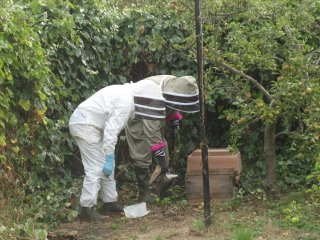 Not only did he find the bees from a local keeper, check that they were healthy, he also brought them round, he took time and trouble to show me what to do and how to do it.

Peter also runs the introductory course (with Charlotte Winterborn) for the Surrey Beekeepers' Association, and very good it was too (and only £35 for a six-week stint).

Pleasingly, Peter brought everything he needed - except he forgot to bring a hive tool. No-one's perfect, and it made me feel very slightly less incompetent (though I soon put that right).
at August 17, 2006 No comments:

Making up syrup to feed the bees

My bees arrived late in the season. August is usually the time to take the honey crop out, and then leave the bees alone to build up their stores for the winter.

The first thing was to ensure that they have enough food, to help them build up both numbers of bees and honey stores.

The syrup is a one pound of sugar in one pint of water. This goo is then put in a bucket with a lid, and the lid has a gauze patch in it. You then turn the bucket upside-down and plonk it on the crown board on top of the hive (under the outside roof), and the bees can feed on the syrup through the gauze.

Simple, except to start with I got the proportions completely wrong, and when I turned it upside-down, it came straight through the gauze.

One sticky kitchen floor later, I figured that it's more like two pounds of sugar to a pint of water.
at August 16, 2006 No comments:

Email ThisBlogThis!Share to TwitterShare to FacebookShare to Pinterest
Labels: feeding

Sticking the bees in the hive

My hive is a WBC, the traditional-looking version with the slanted sides. The hive takes eight or nine (too busy to count) frames, and the bees arrived in a brood box from a National hive, which has one more frame than mine.

When the bees had calmed down, the first job was to take out one frame and make room to transfer all the others, inspecting them as we went, looking for the queen to make sure we had transferred her successfully.

First thing you notice - it's *very* hot in a full bee suit, even more so if you're a novice.

Eventually we found the queen, who was clutching on to the side of the old hive. Had we not found her, we might easily have left her outside.

Peter picked her up in a queen clip (a bit like a large hair clip, with enough room to let worker bees in and out, though not the queen) and then isolated her with a queen cage so he could mark her with a white dot.

The trick is to pick her up with the clip, then pop her back on a frame and trap her with the cage so you can mark her. In our case, Peter dropped her onto the frame - and she was off! She scarpered! I know I live near Wimbledon Dog Track, but this was ridiculous! Luckily we found her and marked her.
at August 16, 2006

Email ThisBlogThis!Share to TwitterShare to FacebookShare to Pinterest
Labels: queen

Arrival of the bees

The bees arrived, delivered by Peter in part of an old brood box (the bees, that is, not Peter). There are around 30,000 of the little buzzers, on ten frames.

We spent a few minutes arranging the new hive, ready to receive the new tenants.

Bearing in mind we had full bee suits on, Peter said, "When I open this, run!"

A comforting start to beekeeping.


Full bee suits arrived. Plenty of pockets, robust zips with big ring-pulls on them for gloved fingers to grip, and not scary white.

When I opened the packet I was sure that XL would be waaaay too big for me. They looked enormous - made me think of the bit from ET with the guys in noddy suits. However, once on, they are pretty much the right size, though a bit short in the inside leg department (tight around the crutch, to be precise).

To give you a rough idea, I am 6 ft 1 in (1m85 to metric monkeys), almost 15 st (95kg). In future I will order one size up; I had forgotten that I am normally wearing jeans underneath. Or possibly I have a distorted body image...

Great piece of kit, and the service from BBWear was very good. http://www.bbwear.co.uk