Discovered: http://www.beedata.com/ a useful collection of information and links, particularly the news page
at February 25, 2007 No comments:

Email ThisBlogThis!Share to TwitterShare to FacebookShare to Pinterest
Labels: link

Discovered http://turlough.blogspot.com/
at February 21, 2007 No comments: 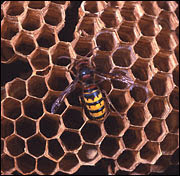 The French honey industry is under threat from hoards of bee-massacring oriental hornets, the Daily Telegraph reports.
The forests of Aquitaine, in south-west France, now play host to swarms of the the Asian Hornet, Vespa velutina, which is believed to have arrived there "from the Far East in a consignment of Chinese pottery in late 2004".
Entomogist Jean Haxaire, who first eyeballed the invaders, said: "Their spread across French territory has been like lightning."
Haxaire said he's now counted 85 "football-shaped" nests across the 40 miles which separate the towns of Marmande and Podensac "in the Lot et Garonne department where the hornets were first spotted".
The Asian Hornet can cause some serious damage to a human, "inflicting a bite which has been compared to a hot nail entering the body". But that's not the principal threat they pose. They can decimate a nest of 30,000 bees "in a couple of hours" in search of larvae on which to feed their young. This, unsurprisingly, gives local beekeepers serious cause for alarm.
The hornets are just the latest blow to the French beekeeping industry. Pesticides and hot summers have taken their toll on bee populations, and a spokesman for the French National Bee Surveillance Unit said the winter mortality rate among bees had risen to six in ten.
Accordingly, honey production has been hit hard - down 60 per cent in south-western France in the last 10 years. The country's 1.3 million hives, managed by 80,000 beekeepers, are unable to supply demand and France now imports 25,000 tonnes of honey annually.
The Bee Surveillance spokesman lamented: "The arrival of these hornets has made the situation considerably worse. The future of our entire industry is at stake."
In Britain, meanwhile, it looks like we'd better start stockpiling honey. Stuart Hine, manager of the Insect Information Service at London's Natural History Museum, warned: "There's no doubt that these hornets are heading north and will probably find their way to Britain at some point."
There is, however, some hope for Blighty. While Hine confirmed climate change meant the hornets would find summers very much to their liking, "they would still have difficulty coping with our winter frosts". ®
BootnoteApparently, 40 people die each year in France as a result of hornet stings, "mainly because of allergic reactions". Claire Villement, of France's Natural History Museum, has called for calm and asked citizens not to succumb to "national panic about killer wasps". "The legend that three bites from a hornet can kill you are totally false. People can still enjoy their picnics in the countryside."

As seen in both The Register http://www.theregister.co.uk/2007/02/21/killer_hornets/ and in The Daily Telegraph http://www.telegraph.co.uk/news/main.jhtml;jsessionid=DI3TUYKFGGADXQFIQMFCFF4AVCBQYIV0?xml=/news/2007/02/21/whornets21.xml

(Sent to me by Jim Burke, The Bronze Group, LLC, www.thebronzegroup.com - thank you, Jim)

Scientists looking into a mysterious ailment killing off honeybees are hoping to find answers out West, where bees are currently helping pollinate California's profitable almond crop.
Beekeepers from around the country each year flock to the Golden State this time of year, releasing their insects to jump-start the $1.4 billion California almond crop.
Researchers hope the diversity gives them a large sample from which to figure out why some bees remain healthy while others become afflicted with an illness called colony collapse disorder.
The ailment has killed off tens of thousands of honeybee colonies in at least 21 states, researchers said, threatening the livelihood of commercial beekeepers and potentially putting a strain on fruit growers and other farmers that rely on bees to pollinate their crops.
The expedition to California couldn't have come at a better time for researchers scrambling for answers. About half of the nation's available commercial bees are transported to California each February for the task, when trees burst with light pink-and-white blossom.
Marsha Venable, spokeswoman for the Almond Board of California, which represents growers, said a group task force assigned to monitor the situation found that there was no bee shortage this year.
"There's a sense of comfort of enough bees to do the job," Venable said Monday by phone. California accounts for 80 percent of the world's almonds, according to that state's food and agriculture department.
But bee researchers from Pennsylvania and Montana who have spent the last couple weeks in California collecting test samples said they have heard stories of beekeepers having lost colonies by the thousands, forcing them to return home with no work and few bees.
"One yard had colonies that were failing. One was one of the worst cases we've seen," University of Montana bee researcher Jerry Bromenshenk said in a phone interview Monday. "That's why we are all focused in California at this point."
Michigan had first signs of illness
The first report of colony collapse disorder came to researchers at Penn State University in November, though scientists now think that the problem may have been around as early as a couple years ago.
Bromenshenk is also president of Bee Alert Technology Inc., a Missoula, Mont.-based firm that is surveying beekeepers to determine the geographic extent of the problem.
While there are no definitive answers, he said survey results so far show the first signs of the illness may have popped up in Michigan, Wisconsin and Iowa.
at February 15, 2007 No comments:

Bees on the web

This is a loooong 10min video of a beekeeper catching a swarm. Ignore the first half, the camera is all over the place: I suggest you start watching from five minutes and onwards http://www.youtube.com/watch?v=9RBL9vnhRag
at February 12, 2007 No comments:

Bristol Zoo (http://www.bristolzoo.org.uk/) has an unusual beehive: three frames set one above the other in a glass case. The top comb, not seen here, was covered with active bees. I spotted a not particularly big queen, marked with a green dot. The middle comb, in the video, had relatively few bees on it and the foundation was incomplete as you can see. The lowest frame was empty of bees and was very dark, old comb.

You can see in from both glass sides, though not very clearly. There were probably not more than a few thousand bees in total. It was a very cold day (Sunday 11 February), but the bees were flying. I suspect the colony was fooled by the warmth of the hive, which is inside.

http://www.bristolzoo.org.uk/learning/animals/invertebrates/bee
at February 12, 2007 No comments:

The mathematics of beekeeping

In winter, if the queen is producing low numbers of eggs or even none at all, the hive comes perilously close to extinction, because the bees will be dying more quickly than she is laying. During winter, the bees must live longer, or the hive would die off.

Clearer pics of the Honey Show 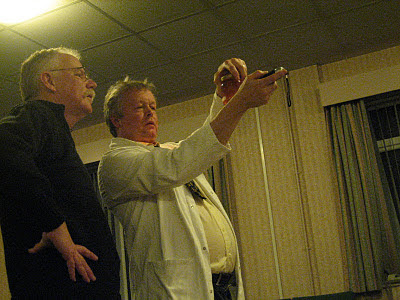 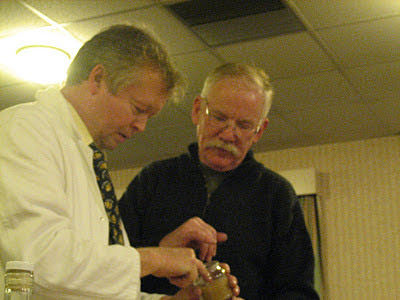 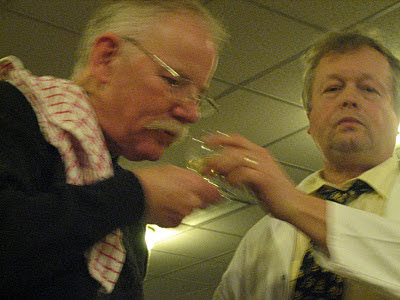 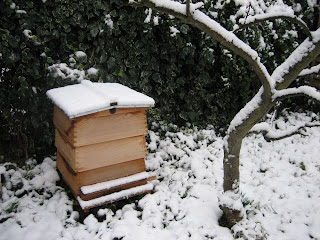 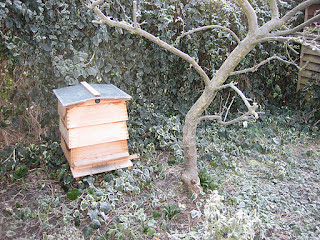 Very cold today - and an extremely hard frost, as this picture absolutely fails to show. BeeCraft magazine and our own WBKA newsletter full of dire warnings about overwintering and the likelihood that come the end of March they'll all be dead.
at February 07, 2007 No comments:

From BeeCraft, The Official Journal of the British Beekeepers' Association, February 2007, in the article "Wirral Beekeepers' Polish Expedition 2006," page 13:

"During the last evening in the hotel the group danced to a local duo till the early hours and then set off the next day to travel north again. The hotel had to send out for another barrel of beer and the staff said the bar takings were the best ever."