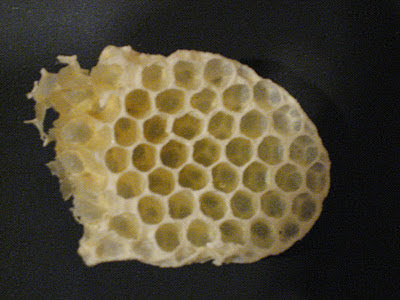 Very exciting, first honey - thankfully all due to massive Incompetence!

Having crammed the bees into one brood and one super for the winter, and done nothing by way of inspecting the colony yet this year, it turns out that they are bursting out of the beehive. They have been building extra 'wild' comb in the space above the crownboard - hence the picture.

Because this piece of comb was poking out through the crown board, I had to level it off to be able to add a new super (see below) to give them enough room - and Lo, the comb was full of delicious sweet honey! Wow-wee!

I opened the hive purely to insert the queen excluder and slip in a tray of Apiguard (http://www.vita-europe.com/). The first thing I saw, apart from the feeder left on over the winter, was this chunk of comb sticking up. It's almost translucently pure, and smells wonderful.

Remedial action for the squashed-in-like-sardines bees? I removed the crown board, added the queen excluder to the top of the super (ie, giving the colony both the brood box and the super for living quarters), and then added another super on top of that, with the crown board on top as usual. The Apiguard tray is resting on top of the queen excluder, on the basis that the bees will be coming up past it to fill the top super.

Incidentally, last year (2006), Apiguard was the only treatment applied to the hive, and the colony is positively thriving.

Lotties (this one's down Richmond way) 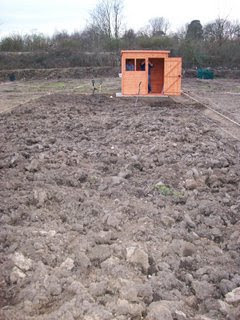 Green Lovin' Gal reports from her allotment that only one beekeeper is permitted on the site. Green Lovin' Gal wants to keep bees, and the Committee won't let her, the miserable gits. Visit http://anallotmentsnotjustforchristmas.blogspot.com/ to cheer her up!
at March 13, 2007 No comments:

Congestion at the hive