Well, I put it down to the very warm weather and the abundance of nectar and pollen... the bees have swarmed *again*, the little buzzers!

The cast (as such as secondary swarm is called) was probably on Sunday 29 April - I was away. By the time I heard about it from yet another stressed neighbour, the swarm had upped and gone, with only a few stragglers left.

I looked at the hive from the outside, and it seems busy enough, so I may yet be able to produce some honey (my target is 10kg) and recover some dignity.

You would never know they had swarmed 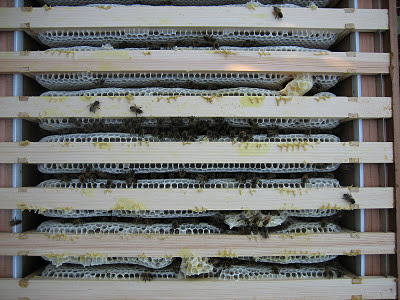 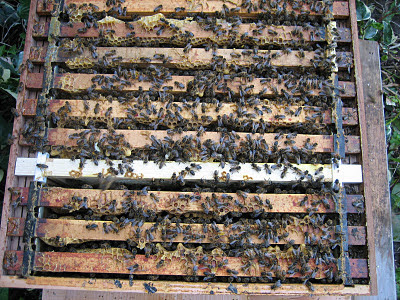 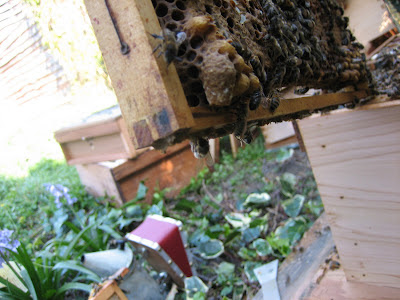 You would never know that the bees had just swarmed; the hive is still absolutely full to bursting. The top photo is the super, the next is the brood, and the last is a queen cell (well, I think it's a queen cell...)
at April 16, 2007 No comments:

Bees in the Antipodes 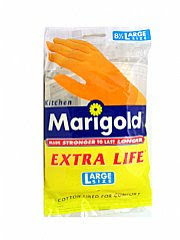 Ngaio has sent me a link to her excellent site "Bees in the Antipodes."

She asked me "You sound like me - I am still trying to sort out how to hold smoker ( preferably going),hive tool and camera, with huge bulky gloves on whilst opening hive.. any ideas ?"

Well, speaking from a position of profound Incompetence, (a) I forgot the camera last time anyway, and (b) I wear lovely yellow Marigold brand washing-up gloves, so it's a bit easier - and I use a tripod for the camera.

The secret to the smoker is cardboard, and LOTS of it. When we caught the swarm, Peter (formerly a Regional Bee Inspector) stuffed his smoker with cardboard and had a mini-inferno on his hands before closing up and smoking with it.

Email ThisBlogThis!Share to TwitterShare to FacebookShare to Pinterest
Labels: smoker

After this week's swarming debacle, tomorrow is the first inspection of the depleted hive. Who needs Colony Collapse Disorder when the bees PUFO* of their own accord, eh?

From the outside, the hive looks as busy as ever. I could be lucky, and find that the remaining bees have re-queened themselves, and that she has flown off and mated. Everything could be both hunky and dory.

On the other hand, the workers might have started laying, the new queen might not be mated, or a cast (sort of mini-swarm) might be in preparation. Or there may be too few bees remaining for a viable colony, and they will simply dwindle away.

Naturally, if the ringleader is still in the hive, I'll have to give her a darn sharp talking-to.

See how they swarm

Watch how, with the queen bee inside the box, all the workers are magnetically drawn inside. Amazing!
at April 11, 2007 No comments: 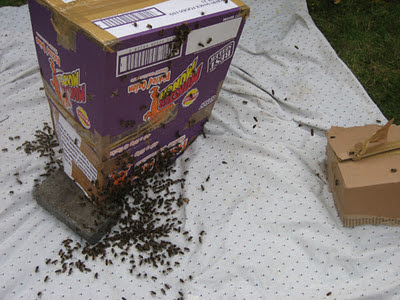 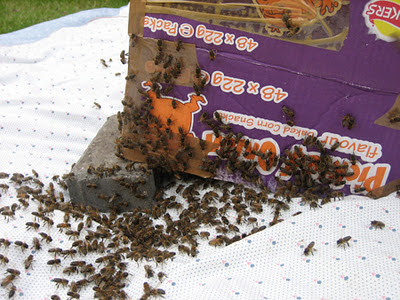 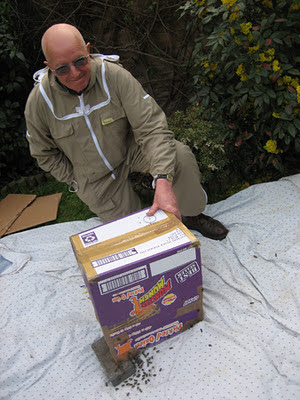 Sure enough, the bees swarmed today - bugger! Around 40,000 of them took off at about 3pm, sending neighbours, dogs and pregnant wife into paroxysms, fits and panics. I arrived home to find them, with help from the outstanding Mr Peter Bowbrick, swarming up a neighbour's fence (the bees, that is, not Peter).

After much cussing, we (mainly Peter) managed to persuade the little buzzers into a cardboard box, and took them off to Morden Hall Apiary.

From my hive inspection on Monday, two days ago, I had managed to overlook queen cells (which there must be). I had correctly guessed that the bees were about to swarm, and yet I had not managed to prevent it...

Oh well. Capturing a swarm was great learning, as was throwing them into a new hive. You gotta start somewhere.
at April 11, 2007 1 comment: 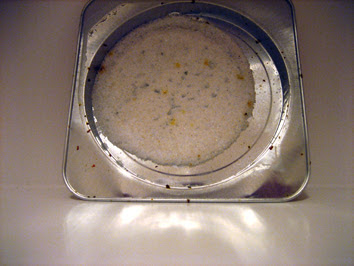 Pic of two weeks' worth of Apiguard take-up.

When I mentioned at the recent WBKA meeting that the Apiguard had been in the hive, there was a kind of collective intake of hushed breath and clenching of buttocks. It is a Bad Thing to leave the Apiguard in the hive while the bees are making honey, as the thyme extract taints the honey.

Time to read up

Along with Colony Collapse Disorder and the Spring Dwindling, I had been expecting the hive to be less busy, or even dead... No way!

During an early inspection this hot Easter weekend (8am - the bees fairly sluggish), I found (a) bees building comb up the outside of the hive between the lifts and the boxes, (b) the super with foundation added last week almost completely built up into comb and (c) the brood and super, acting as a combined brood box, absolutely jammed with brood.

This was a full inspection, right down to brushing the hive floor, examining the brood comb and generally sorting out stuff. As far as I can tell, the main problem is that there is no problem. They are BUZZING!

Time to read up on what's happening. I have a sneaky feeling that they are about to swarm. Lots of drone cells, though I could not find any queen cells. To keep them busy, I have replaced one brood frame with a new blank frame of foundation.

Disappointingly little comedy Incompetence. I managed to gas myself with the smoker, with no effect on the bees, and several times had to traipse back to the shed having forgotten some key piece of equipment. No pictures this time, I forgot the camera.
at April 09, 2007 1 comment:

The weather is annoyingly variable. Yesterday morning was beautifully warm, with the bees buzzin away, while the afternoon was waaaay too cold to open the hive for a peek. Today is a bright, blue cold and sunny Sunday, with only a few bees venturing out; too nippy to check the hive.

Thank you to Green Lovin' Gal for her kind, gnarled comments about the bee videos. Couldn't agree more. (GLG has an excitingly diverse site about allotments; the most recent entries mainly concern a new baby, Clara (niece?), shots of friends and rellies persuaded to do the dirty digging, and painting her shed: www.anallotmentsnotjustforchristmas.blogspot.com). Good work gel.
at April 01, 2007 1 comment: