Have ordered a stack of hive bits from Thornes. Very good service (from Gill Smith) on the telephone, patiently explaining what fits where, why and how. One day I'll get the hang of it.

Email ThisBlogThis!Share to TwitterShare to FacebookShare to Pinterest
Labels: hive

Quick visit today to check that the queen is Down Below, by looking for new brood.

The good news is that Yes, there are definitely new larvae below the queen excluder, in the frames of the super that I am using as a half-brood.

Unfortunately, this super now being used in the brood area is the one I moved down at the previous visit. Put another way, there may be larvae in the brood area because I put them there. For all I know, the queen is still upstairs.

In the true spirit of Incompetence, the logic only dawned on me at the instant I had finished closing up the hive.

On the other hand, the bees are filling up the supers with honey - I had to add another layer to their cake, and now have a total of four supers.

Just when you thought Incompetence was dwindling

Super-fast check of the hive ... took each super off in turn and looked for capped brood... and sure enough, there are emerging bees in the super immediately above the queen excluder. In other words, the queen must be above (rather than below) the QE.

As usual, I could not find the queen, despite plenty of looking (and four stings). On the basis that the queen is where the brood cells are, I moved the super with the brood below the QE.

(Being a WBC hive, I have been advised that a single brood box is probably not big enough, and it is better to have both a brood box and a super below the QE. This arrangement is known as a "brood and a half," a phrase I trot out to encourage the belief that I know what I am doing.)

In conclusion, I noticed that here were *lots* of bees, so added another super to the top. The hive now has a brood & super below the QE, plus three supers on top.

Now I come to write this up, I realise that there appear to be lots of bees because they are all in the supers and not in the brood box.

Just when you thought Incompetence was dwindling, it rears its confused head!
at May 12, 2008 No comments:

What the beekeeper did 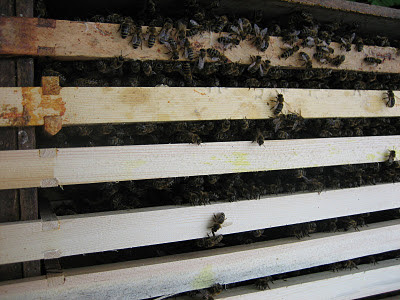 While I was on holiday, Phil captured the (enormous) swarm and popped them into the hive! Great work. I must go away more often.

I visited this evening, and found the bees in fine form. Curiously, the girls have set up home all crammed down one side of the hive (see pic), leaving the central frames and opposite frames untouched.

Looking through the brood frames, I could see no larvae or capped cells. It could be that the queen is above the excluder, or that she has not had enough time to lay. Will revisit.
at May 04, 2008 No comments: