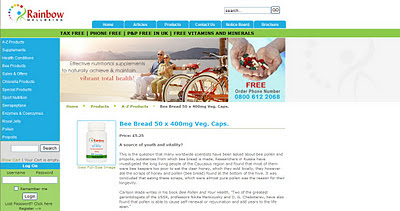 Yes, yet more pseudoscience, this time from Rainbow Wellbeing (http://www.rainbowwellbeing.com/):

A source of youth and vitality?

This is the question that many worldwide scientists have been asked about bee pollen and propolis, substances from which bee bread is made. Researchers in Russia have investigated the long living people of the Caucasus region and found that most of them were bee keepers too poor to eat the clear honey, which they sold locally, they however ate the scraps of honey and pollen (bee bread) found at the bottom of the hive. It was concluded that eating these scraps, which were almost pure pollen was the reason for their longevity.

Carlson Wade writes in his book Bee Pollen and Your Health, "Two of the greatest gerontologists of the USSR, professors Nikita Mankoysky and D. G. Chebotarev, have also found that pollen is able to cause self-renewal or rejuvination and add years to the life span."

(a) bee bread is not almost pure pollen [that would be called 'pollen'], it is pollen, honey and all kinds of things, such as fungi and bacteria
(b) citing a researcher is from Foreign Parts with a funny-sounding name does not make the research valid (see http://mellifera.blogspot.com/2009/07/ever-wondered-how-bee-is-able-to-fly.html)
(c) quoting from a book does not make the evidence any better than asking your granny (I should know, I have written two books)
(d) most importantly, hens' teeth in a light suspension of snake oil is much more effective than propolis and pollen at extending human lifespan (I should know, I am 371 years old and from the far galaxy came I did).