How many bees does it take...

Looking at the video below, I counted 44 arrivals in one minute.

A colony might produce 25kg of honey in a summer. To do so, each bee brings a load of about 5 microgrammes of nectar or pollen back to the hive per trip, minimum.

In fact, a great deal of the nectar and pollen brought into the hive does not contribute to honey production (it actually produces more bees, honeycomb wax, propolis and bee poo), so either there are more trips or they carry more per trip.

Beekeeping at its best?

A friend, Sam, has been keeping bees for several years now. This is his Incompetent Beekeeping track record:

Three WBC hives this year, only one colony alive
No honey this year
No honey last year
Stung every time he opens the hive

My faith in Incompetent Beekeeping is alive and well - unlike most of his bees.
at September 25, 2006 No comments:

Bee stings are, I now know, very painful - and I haven't even been stung, yet.

It turns out that the bees can *almost* sting through the bee suit. During the spectacularly incompetent insertion of the varroa treatment (see two entries below), the bees became very, very upset.

During the excitement I felt some sharp pricks - a bit like being nipped by a horsefly - on my forearms. I was wearing a tee shirt under the bee suit, and on all other occasions I have been wearing a long-sleeved suit.

This was four days ago, and I still have great hard red blotches on my arms.

With one layer of cotton between me and a bee, it turns out that their barb is *just* long enough to reach my skin, and *not quite* long enough to inject the venom for a full sting.

Hmmmm. Not quite sure if this counts as "unstung so far" or "lucky escape." 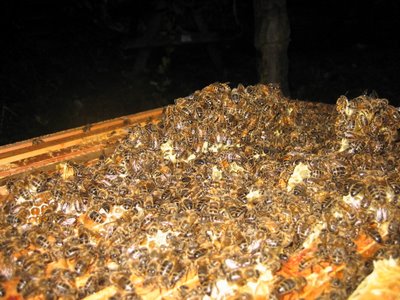 The bees have built up comb linking the brood box to the super above it - with some exciting results for an Incompetent Beekeeper!

When I lift the top box off (the 'super'), some of the frames in the brood box below are stuck to it. The first time I lifted the super without realising this, the lower frames broke off when I had the super about a foot in the air. The frames that I had unwittingly dragged out of the brood box dropped back down into the brood box with a clunk, upsetting the bees more than somewhat.

This photo is a shot of the top of the brood box, covered in very annoyed bees, honey, broken comb and brood.

Live and fail to learn, that's the Incompetent Beekeeper motto.

Two tasks this morning: replace the feeder with more syrup, and insert a varroa treatment disc.

Right from the beginning, the bees were not happy. I opened the hive at around noon, and the bees immediately burst up towards me - quite alarming.

Then, after separating the brood and super boxes (to insert the varroa disc), even more bees launched themselves at me...

The comedy pink frills on the gloves were definitely not helping, with tens of bees tangled up in them, buzzing furiously. And all the time more bees were leaving the open hive and banging into me...

It's difficult to describe when you have maybe 100+ bees trying to sting you. Worrying?

I put the hive back together, sharpish, put the syrup feeder on top, plonked the lid on and legged it.

Twenty minutes later, the bees were still attacking me, although I was now 20 metres from the hive. Eventually they stopped, and even then I got one stuck in my hair - again.

I had just come back from a short jog, and was very sweaty. Maybe they reacted.

Bees at the hive


An old piece of comb left for the bees to clean up, next to the hive. It took them about a day to scrape every last glob of honey off it.
at September 12, 2006 No comments:

Here's a tip-top-tip if you are trying to clean a surface or tool of propolis: Fairy Power Spray!

Propolis is the goo that bees make to seal gaps in the hive. It's their all-purpose builders' glue, a kind of No More Nails for Apis Mellifera.

Oh Boy, it sure is sticky!

Propolis resists scouring, detergents, soaps and oven cleaner. Fairy Power Spray, on the other hand, cuts through propolis almost as soon as the spray hits the surface, resulting in a yellow gunge that you can simply away.

Procter & Gamble, there's a whole new market out there!

I must do something about those gloves!

Took 20 frozen bees to the Surrey Beekeepers' Association (Wimbledon Division) for disease diagnosis, and they were given a clean bill of health.

We chopped the heads off some bees, and looked at the trachea for signs of acarine (a mite that infects the airways): all clear. The remaining twenty or so bees, we chopped off the abdomens, ground them up and inspected the resulting goo for nosema, a spore that infects the gut. Again, a clean bill of health.

It's a violent way to diagnose diseases, and it felt cruel. On the other hand, with some 35,000 or more bees, it's for the greater good of the hive.